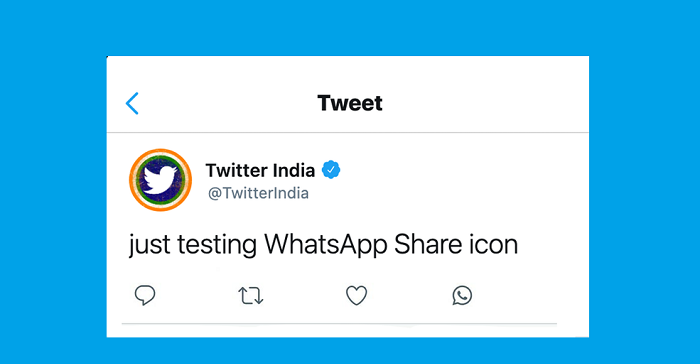 5/5 - (1 vote)
Twitter’s looking to better facilitate the spread of tweets beyond its own platform via a new WhatsApp sharing button for users in India, along with a new LinkedIn sharing option, with dedicated tweet presentation in the app.

First off, on the new WhatsApp button – given WhatsApp is by far the most used messaging app in India (487+ million users), Twitter’s looking to lean into that embedded usage, by testing out a new, dedicated WhatsApp share button in the lower tweet function display.

As you can see in this example, some Indian Twitter users are now seeing a WhatsApp icon in their tweet engagement options, which enables users to quickly share a tweet with their WhatsApp contacts.

I mean, kind of. Apparently, Twitter hasn’t fully ironed out the functionality of the button as yet – but theoretically, what it will eventually facilitate is more streamlined tweet sharing into your WhatsApp chats.

Twitter provided this statement on the test (to TechCrunch):

“Starting today, we are rolling out a new experiment exclusively in India – an important market for us. We are replacing the share icon on Tweets with the WhatsApp icon for the majority of people who use Twitter on Android in the country, so sharing their favorite or noteworthy Tweets is easy even beyond Twitter, making the experience more open, accessible, and holistic for them.”

Again, WhatsApp is the key messaging platform in the region, and really, the key connective tool linking Indian users into the digital economy, so it makes sense for Twitter to lean into this where it can, with a view to maximizing tweet reach and engagement.

That’ll provide more ways to share relevant tweets across all of your favorite platforms, while also helping to ensure that Twitter can keep tabs on such activity – as opposed to people sharing screenshots of tweets instead, which are still very common, and can’t be attributed back to the app itself.

And Twitter really wants to track that data, because Twitter remains convinced that millions of people actually engage with tweets each month, but never actually log into the app.

Back in 2015, Twitter claimed that it had over 500 million ‘logged out’ users checking out tweets every month.

Which is more than double its current mDAU count. And while the estimates here seem a little optimistic, the idea is that tweets drive far more engagement and influence than what you can see in their basic analytics stats, and that Twitter itself has far bigger cultural influence than what the raw figures may suggest.

Which could be true. Not to this extent, I wouldn’t say, but if Twitter can provide more sharing options, and subsequently stay connected to how tweets are being shared and re-shared in other apps, that could provide another way for it to showcase this element, and the larger relevance of tweets, beyond its own, relatively small user count.

I do believe that Twitter is driving more discussion than what it may seem, and it’ll be interesting to see if these new share buttons end up providing more data on this aspect.