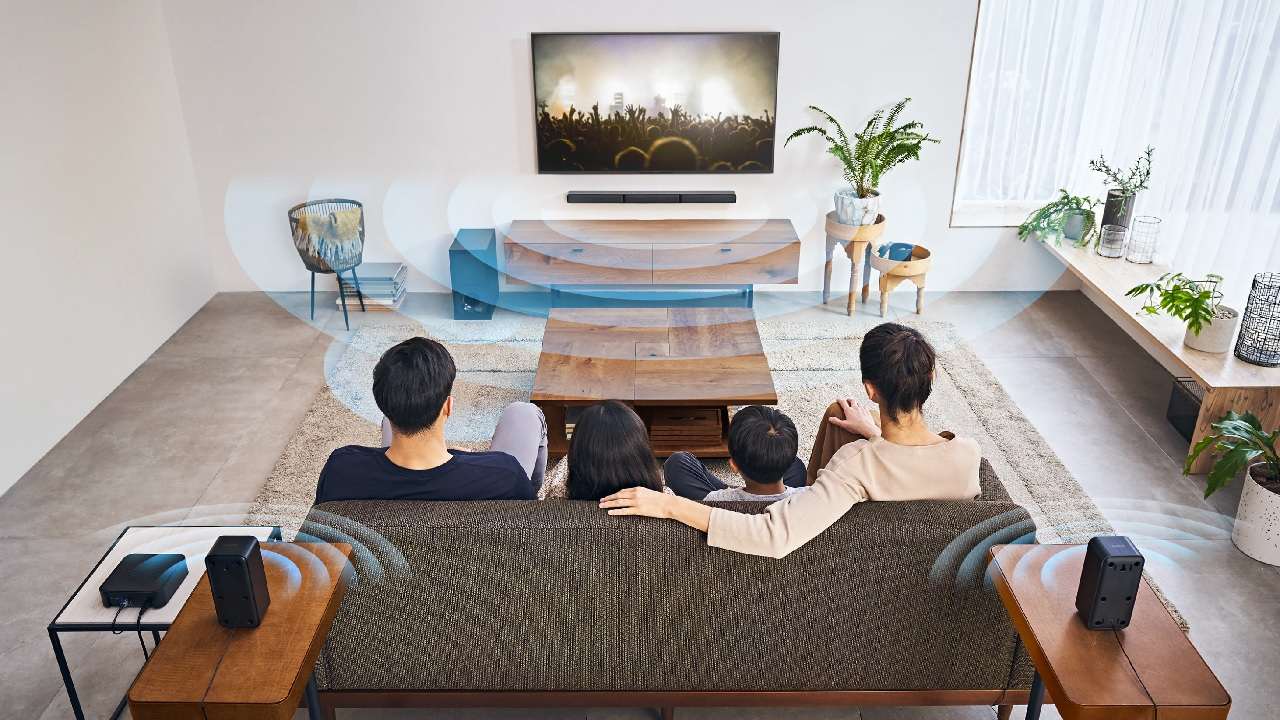 If there’s one thing we’ve learned during the pandemic is that no matter how good your TV is, if you don’t have an equally awesome sound system, you will miss going to the theatre. For the premium user, we have devices like the Sennheiser Ambeo (review), Samsung Q950A (review) and even the Sony HT-Z9F (review). But not everyone is looking to spend a premium on a soundbar especially when there are so many options available on a budget. For a budget of Rs 30,000, we have the likes of the Sony HT-RT3, JBL Bar 2.1 and many more. While some of the soundbars mentioned here are 2.1 setups, some are a 5.1 setup with the rear speakers connecting to the system via physical cables (for the budget offerings). While I’m all for a good 5.1 setup like the Sony HT-S20R (review), cable management for the rear surround speakers can be a bit of a hassle. It looks like Sony agrees and has done something unique with the S40R – made the rear speakers wireless…. kinda. While wireless rear speakers are common in high-end soundbars, this is the first time I have seen them on a sub 30K soundbar. Their implementation, performance and lag will be touched upon in this review. Has Sony made it easy for more people to set up a 5.1 home theatre without the hassle of cable management? Does this soundbar bring the theatre home? Read on and find out!

Sony HT-S40R: Specs at a glance

Just like we’ve seen with the Sony HT-S20R and the Sony HT-S500RF (review) we reviewed earlier, Sony has the front right, left and centre channel in a single bar. The bar is wide and fits the length of a 43-inch TV. We’ve been using this soundbar with a 43-inch Redmi TV and it sits flush below the TV blending into my entertainment setup. The bar itself has a very traditional Sony look to it and that’s not a bad thing. You have a grill up front covering the drivers and there are distinct demarcations for the front right, left and centre channels. The soundbar curves around the edges but it doesn’t have too rounded edges which are nice. The grills covering the speakers don’t wrap around the bar as we saw with the S20R. The soundbar is fairly slim and is designed for tight spaces below the TV. You can wall-mount it as well.

Speaking of the design, the wireless amplifier is slightly bulky but you can wall-mount it as well if you like. It only has a power port, ports for the speakers, power and link buttons. It also has an LED light to indicate the connection status.

The rear satellite speakers themselves are small and compact. The driver is covered by a mesh grill that doesn’t wrap around the speaker and while they may feel light and flimsy, they are actually decently well built. You can wall-mount the satellite speakers if you like.

As for the setup, connect the front soundbar to the back of the subwoofer. The cables and ports are colour-coded. Place the rear speakers in a comfortable position, preferably at ear height facing you. Connect the satellite speakers to the wireless amplifier and connect the amp to a power outlet. There will be a red light on the amp when you switch it on. If it flashes green, don’t panic. Just power on the soundbar and you should see a steady green light letting you know the connection is stable. Or, you could simply call Sony’s helpline number and request an installation!

Coming to the remote control, it is the exact same remote control you get with the Sony HT-S20R. Plastic, minimal and compact is what comes to mind when we hold it. The buttons are rubbery making them easy to press. The power and input buttons are right at the top making them easiest to reach.  The remote gives you access to 5 different sound modes – standard, cinema, music, voice and night. There is also an auto sound mode. There is also a Dimmer button that dims the display on the subwoofer for a more immersive viewing experience. There are other controls like playback and subwoofer controls.

To test the performance of the Sony HT-S40R, I have broken it up into music, movies and gaming. We played a lot of content from Blu-Ray movies to content off streaming services, gaming via the PS5 and much more. Before we dive in, know that I did not notice any lag from the surround speakers. The performance was as good as a wired connection and in the time I used the HT-S40R, I did not notice any drops from the rear speakers as well.

Sony is known for making good headphones, earphones and Bluetooth speakers, and the same legacy translates to its soundbars. You do get the slightly extra bass from the soundbar which will appeal to most. I reduced the subwoofer settings by a couple of points to remove the over present bass. Overall, music can be described as good from the soundbar and quintessential Sony, which is a good thing. We heard a bunch of songs on this bar like Wicked Games, Bad Habits, Asylum for the Feeling by Silent Poets and a few more. The instruments are clear, vocals audible and the soundbar works well. If you are one that likes to listen to music from all the speakers, then know that the audio comes from the surround speakers as well as the front left and right, giving you quite a holistic sound. For music, my personal favourite soundbar is the Yamaha YAS 209. But then again, that soundbar is priced close to 35K and is a 2.1 setup only.

I connected the Sony HT-S40R to the recently launched 43-inch Redmi TV that has an HDMI ARC port. I connected a PS5 (review) to the TV and used the console as my main media device. In the past, especially with budget soundbars, I have seen that the content plays from all the speakers all the time and this doesn’t give an immersive experience, especially for content mastered in 5.1. I am happy to say, that isn’t the case here. Considering the price of the soundbar, its performance is quite good. There is clear channel separation from the surround speakers though the channel separation from the front feels narrower. I recommend keeping the rear satellite speakers at a 45-degree angle behind you with the driver facing you at ear height for the best surround experience. I also bumped up the rear satellite speaker to +6 (which is the maximum) to ensure I didn’t miss any details. The speakers were about 3-4 feet away from my listening position.

Ready Player One is a great example of good channel separation and the same is the case here. While the dialogues were slightly softer than I’d like in this sequence, you can’t manually bump up the centre channel only. You can use the voice mode on the soundbar to enhance the vocals but at the cost of the rest of the effects. While the soundbar has a bunch of presets like Cinema, Standard, Music, etc. I found keeping it on the Auto preset did a good job at judging the content and representing it the best. In the case of Ready Player One, the Auto preset gave the same experience as Cinema. The effects of cars flying all around you are very clear and the jump from surround left to right gives a good experience.

Same for a lot of the action sequences in Altered Carbon on Netflix. When bullets fly all around the room, you can feel them. Another good example of immersive channel separation is when Batman enters the motorcycle chase sequence in the Dark Knight Rises. The shift of the sound of the motorcycle from behind you to in front of you can be felt. While the fluidity in channel separation isn’t as good as the Samsung Q950A, there is no comparison considering the Samsung bar costs Rs 1,00,000. But for comparison, considering the price of this soundbar, it is pretty good.

When it comes to gaming, I played some games on the PS5 and the experience was a lot of fun. The soundbar can get loud and keeping it at about 60-65 per cent volume fills the entire room. In a game like Ghost of Tsushima when you bring up the guiding wind, it gushes from the surround speakers quite prominently before hitting the front speakers. Even the archers firing the arrows swish about you. The only catch is that you need to need to keep the surround speakers’ level at +6 and placer them a little more than an arm’s length away to enjoy the surround experience. The further you keep the surround speakers, the less pronounced their presence. Even in Dirt 5 (review), you get quite the immersive experience with the cars whizzing all around you. If you are upgrading from your TV speakers to this soundbar, then you will definitely have a more immersive experience.

On paper, the Sony HT-S40R looks like a successor to the Sony HT-RT3. Its biggest advantage is the setup for the surround speakers. They connect to a wireless amplifier that connects to the subwoofer wirelessly, eliminating the need to connect the surround speakers physically to the subwoofer as we’ve seen on the Sony HT-S20R. While the setup isn’t truly wireless, it is very convenient. The overall sound output from the soundbar is very good considering the price point. It can produce punchy sounds for movies, is good for gaming and music lovers as well. Its build may feel a little plasticky, but it does not look cheap at all. It is convenient and easy to set up and comes with a 6ft HDMI cable in the box for ARC connectivity. While the front channel separation may be a bit weak, the overall surround sound effects are good. If you have a Sony HT-RT3, you don’t need to upgrade to this one. However, if you are looking for a good 5.1 soundbar under 30K to bring the theatre home, then you can definitely consider the Sony HT-S40R.