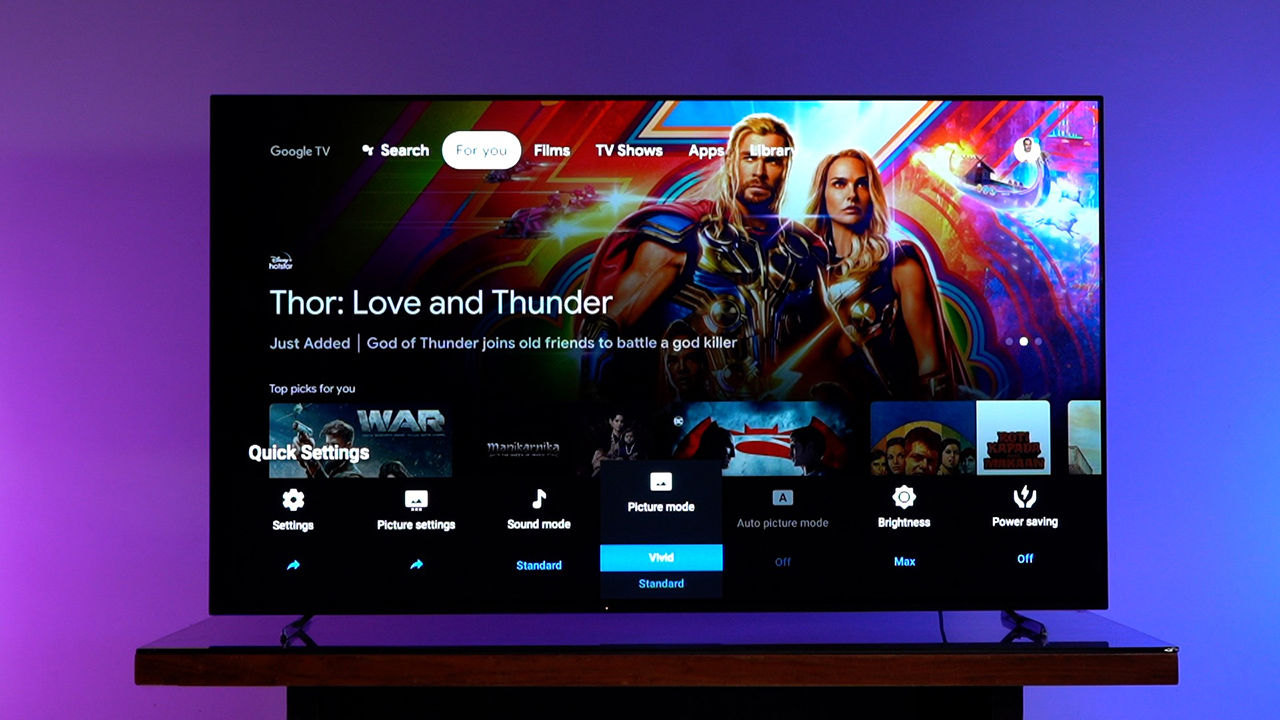 Sony has been betting big on OLED panel technology for years now with many of its premium and higher-end TVs making use of this technology. Over the years, these OLED panel TVs have helped Sony establish its dominance in the TVs market, and now, to take the good work forward Sony has launched the XR OLED A80K in India with a forward-looking design and premium features such as support for 120 Hz refresh rate, low latency modes, ALLM, VRR, HDMI 2.1 and 3D surround sound. We’ve had the 65-inch model of the XR OLED A80K with us for a while now, giving us enough insight to explain what this TV brings to the table.

With Sony’s XR A80K, the company combines a WRGB panel with self-emitting pixels to help the TV achieve pronounced blacks and an almost infinite contrast ratio. This is a similar combination to the one we saw on A80K’s predecessor — the A80J launched last year. However, since it’s an upgrade, this new panel on the A80K also brings with it support for features such as Contrast Pro, XR Triluminos Pro, and Cognitive Processor XR. All these features work in tandem with the self-emitting pixels of the OLED to deliver deep blacks and rich details.

Additionally, because of the use of OLED technology, which ensures there are no dimming zones on the panel, the Sony XR A80K also doesn’t suffer from blooming issues. During our time with the TV, we noticed no blooming problems that plague other TVs, including the previously tested Sony X75K which uses LEDs to generate visuals on the panel.

Sony’s new OLED 4K TV also offers support for Dolby Vision, HDR10+ and HLG. When consuming content from streaming portals, the content automatically switches to the best available preset, which in the case of Netflix is a special Adaptive Calibrated Mode that automatically adjusts the picture brightness based on ambient room lighting. For such pieces of content, the panel gets plenty bright without losing out on details and highlights. This also makes the TV not only great for consuming 4K HDR content but arguably one of the best TVs we’ve tested for HDR content.

Of all the available presets, we got the best results for viewing when setting the TV to the Cinema preset. But, during our tests, this preset did give us slightly high delta errors in colour accuracy, with the Custome for Pro preset giving the best results. Set to this colour profile, the TV gave us an acceptable average deltaE of 4.21 with the max deltaE climbing to 8.8. These are good numbers. But sadly not as good as what we saw on the Sony A80J last year.

Testing the panel using Calman Ultimate paired with VideoForge Pro and Spectracal C6 Colorometer, we also found the panel throwing up good brightness numbers for an OLED TV. For SDR content, this peaked at 273 nits, while for HDR content in the Vivid Mode, this went up to around 780 nits. This makes the TV bright enough for consuming content even in a well-lit room. However, dark scenes suffer a bit if the TV is kept in a place where there is direct sunlight. But even this is an issue that can be worked around by tweaking things a bit within the settings menu.

We also got good results when we checked the gamut coverage of the TV. For both the sRGB and DCI-P3, the entirety of the colour spaces were covered by the panel in our testing. As expected, the BT 2020 colour space proved to be more challenging, but here again, the results were quite good.

The A80K hides inside the frame Sony’s Cognitive Processor XR, which is the company’s top-tier chip for the year. While this chip does help the TV improve visual experiences because of its ability to analyse content and recreate it the same way humans see and hear in the real world, its biggest use is felt when you play non-4K content on the TV.

This is where the XR 4K Upscaling engine powered by the Cognitive Processor XR comes into play and drastically improves the visual experience of consuming low-resolution or even SDR content on the TV. In terms of upscaling, the Sony XR A80K gave us very good results. In fact, the upscaling results were so good that I’m tempted to say it’s possibly the best I’ve seen to date on a TV. However, that is not to say you’ll not notice any pixelation in the frame if you’re going to be streaming 480p content on this 4K TV.

However, chances are that if you’re buying an expensive 4K OLED TV, it won’t just be for content consumption. You’ll also maybe want to game a little on it. And we’re happy to say, for this, the Sony XR A80K has you covered.

So in terms of picture quality, the TV does not disappoint. The moment you hook up a console or a gaming laptop, and fire something like Dirt 5 or Assassin’s Creed Valhalla, the Sony XR A80K takes your breath away with its visuals. HDR-ready games look extremely beautiful with rich colours, deep blacks, and impressive contrast. Unlike last year’s A80J, Sony’s latest OLED also gets two ports that come with VRR support and 4K at 120Hz. There’s also ARC, eARC and ALLM on these ports making them good for gaming. In terms of features, the TV also gets Auto HDR Tone Mapping for PS5.

With the latter, the HDR settings on the TV are optimised instantly when your PS5 console is set up with the TV. When in action, the PS5 automatically recognises the XR A80k and optimises HDR setting to suit the TV. This helps visual output in high-contrast scenes, where details and colours in the brightest and darkest parts of the screen are handled accurately by the TV.

For a premium end TV, the Sony A80K series comes with a bunch of audio features that promise to enhance the experience of watching movies or playing games on the TV. One of these is Sony’s Acoustic Surface Audio+ feature. As the company explains, for this the company has positioned five actuators – three behind the screen and two at the sides – to create a fuller sound experience. These actuators have been paired with two subwoofers for a more complete sound experience. Sony has paired this hardware with features such as Acoustic Audio Calibration which automatically calibrates the sound output to improve the viewing experience. Additionally, there is support for Dolby Atmos sound and 3D surround sound upscaling.

While pairing your TV with a separate premium-range soundbar is always an option, the above-mentioned hardware and software on the XR A80K come together to ensure that if you don’t own a soundbar, the audio experience on the TV is still not below par. This is especially true for watching movies and shows, where dialogues are clear and loud and the speakers don’t sound like they are giving up the moment you crank up the volume.

Sony’s XR A80K is a very visually striking unit, that looks worth every penny that Sony’s asking for it. One of the most striking features of the TV is just how thin it is. The thin panel is held together by a plastic enclosure that also houses the TV’s motherboard and other hardware, including the connectivity ports. Talking about these, the TV comes with four HDMI ports, an AV port, a 3.5mm headphones port and two USB ports.

The Sony XR A80K comes with two metal stands which are adjustable for height to help the TV leave space for a soundbar if you have one. These stands are also quite sturdy and keep the TV in place without any wobble. However, in my opinion, these feet are positioned too far apart if you plan on keeping the TV on a smaller table than the size of the TV.

As for the remote, the Sony XR A80K comes with a new remote which does not bring with it a Numpad. The remote looks premium and quite modern to match the aesthetics of your room. It also comes with a mic built-in for voice control with Google Assistant. Apart from the basic playback controls, it also brings OTT hotkeys for some of the most popular platforms. Since it is a premium-segment TV, the remote offers Bluetooth as well as IR connectivity options. Overall, we were quite happy with the remote as it is well built, ergonomic and would be good for all that you may want to do with the TV.

So we’re now on to the big question: Should you buy the Sony XR A80K?

Well, if you’re in the market for a premium segment OLED, then the XR A80K should really be a TV you consider. This TV will provide you with a visual treat that very few TV sets on the market can right now. It offers decent brightness for an OLED and also offers good colour accuracy out-of-the-box when set to the Cinema preset. The panel’s contrast ratios are almost infinite offering you beautiful visuals where the pitch dark meets some light.

But great handling of dark scenes or spectacular HDR performance isn’t its only strength. It also offers really good upscaling of 1080p or even 720p content to 4K, along with good viewing angles and fast refresh rates, VRR as well as low input lag if you’re a gamer.

Overall, all these features combined come together to make the XR A80K one of the best OLED options around. The only problem here may be the money Sony is asking for the TV. Currently, the TV can be purchased for the best price of around Lakh 80 from select physical stores for the 55-inch model, with the 65-inch model likely to set you back around Rs 2,50,000. While this is aggressive for a premium-segment OLED TV, it may still not be aggressive enough for some buyers. For such buyers, you have LG’s A1 and even Xiaomi’s OLED Vision TVs as options.

But if money is not a concern, and premium features and performance is what your heart desires, then there should be very little stopping you from buying the Sony XR A80K.