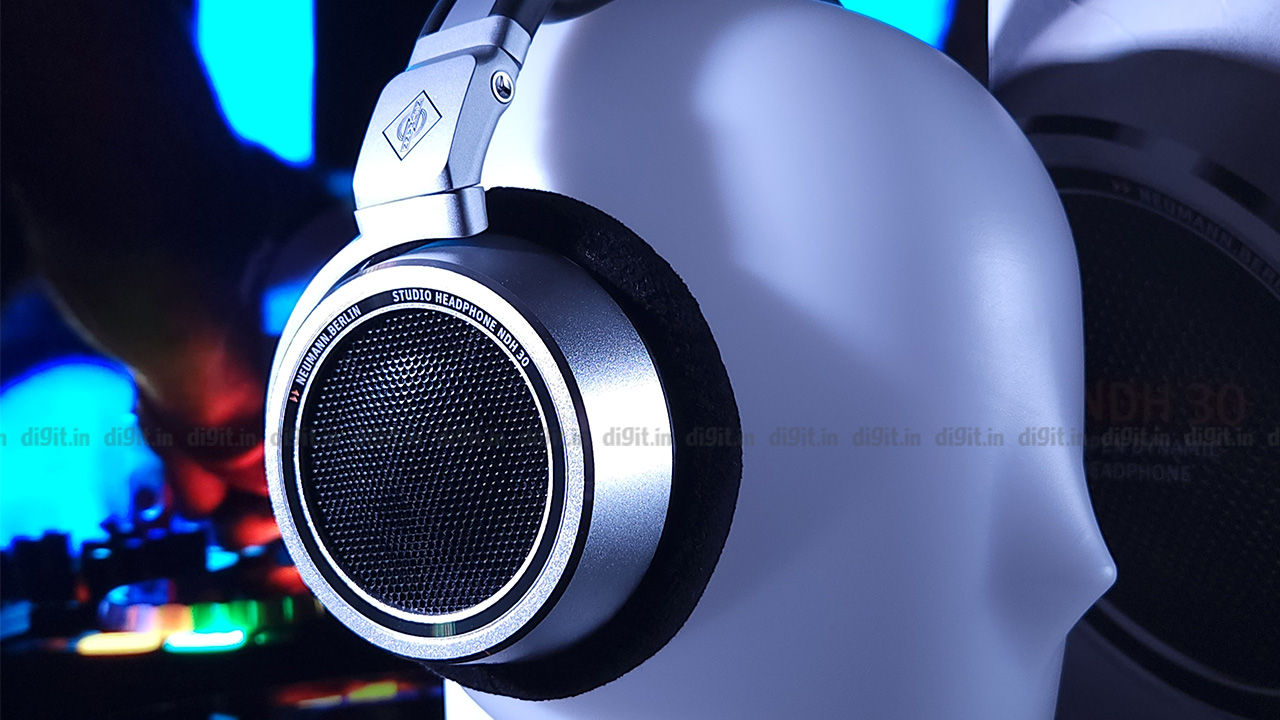 Hot on the wheels of the Neumann NDH 20, which was exceptionally well-received, comes the Neumann NDH 30. Neumann has had a long-standing reputation for delivering some of the best studio microphones and professional monitors in the business, and the NDH 30 attempts to honour that. Unlike its closed-back predecessor, the Neumann NDH 30 is an open-back, circumaural pair of studio headphones primarily targetting broadcast and music producers. These reference studio cans can be used for editing, mixing, and mastering purposes. Priced at ₹52,900, these cans are sure to put a dent in your wallet, but are they worth their asking price? Let’s find out.

The Neumann NDH 30 bears a lot of resemblance to the NDH 20. One major difference is the open-back ear cups. These are wired studio monitor headphones with a brushed silver design with matte black accents. The headphones look and feel premium, primarily due to the high-quality materials used in their construction – namely aluminium and stainless steel mixed with a bit of plastic. The insides of the ear cups are coloured orange, which gives the cans a bit more flair in the design department. There are a lot of subtle yet classy design cues that add to the premium look.

The headphones are pretty heavy at 350 grams but the Neumann has done a commendable job with the weight distribution, so they don’t feel uncomfortable despite their heft. The ear cups’ pads are made of a velour-like material which the company calls “cloth-covered foam”. They are supple, plushy and extremely comfortable, and also, swappable! The headband’s cushioning is plushy as well, however, it does cause some pain on the top of the head after extended periods of usage.

The cups are well ventilated due to the open-back design of the headphones but this does mean that sound leaks out considerably and there’s not much passive isolation too. These are best for use in an indoor studio environment. The cans are fairly portable as well; the arms can be folded inwards and the cups rotate 90 degrees. Neumann has also provided a cloth carrying bag but we expected a hard case at this price point.

The headband is adjustable via a spring steel band and a perforated black metal grille protects the diaphragms inside. The clamping force is adequate  Within the box, you get a three-meter-long connection cable, a screw adapter from 3.5 mm to 6.3 mm format, and the cloth carrying case. The 6.3 mm adapter means you can connect the headphones to an audio interface if needed. The cable attaches to the right side of the headphones; not the usual left side, so the cable could be in your way, depending on your setup.

Since these are wired, studio headphones, they don’t have much in the way of features. There’s no IP rating or onboard controls, but they’re not meant to have these. The NDH 30 are studio reference monitors meant to be used inside a professional setup and features, as we’ve mentioned above, don’t usually make their way onto professional gear.

The Neumann NDH 30 mean serious business, and for ₹52,900, we expected nothing less from this reputed company. The sound profile is neutral with almost no colouration whatsoever, which is what you’d want from a professional reference-level pair of headphones. These cans pack 38 mm drivers that sit at a slight angle to replicate the monitors’ directionality in a studio. They have an impedance of 120 ohms, so most devices, including some smartphones, should be able to power these alright without the need for a super powerful amp.

The bass response is deep and bouncy, the mids are exceptionally balanced and detailed and the highs are dynamic and sparkly. The average consumer would maybe find the highs a tad harsh since these aren’t coloured like consumer-grade headphones – so the sparkly highs would sound a bit unnatural to some. Neumann’s focus with the NDH 30 is to deliver pure and altered sound that is integral for mix engineers and artists – and these headphones deliver. Distortion is near non-existent even at high volume levels and the two drivers are balanced quite well too.

The open-back design allows for an open and spacious sound that cannot really be achieved by closed-back headphones such as the NDH 20. While passive isolation does suffer, the stage is vast which makes the listening experience very immersive. Due to the uncoloured sonic representation, you may feel the need to turn up the volume levels at times, but we’d advise against turning it up too loud to avoid hearing damage.

Although these cans are meant for professionals, they can even rival some audiophile headphones such as the Sennheiser HD 660 S and HD 800 S. While the HD 800 S has a more accurate treble tuning (they’re also far more expensive), the NDH 30 matches up pretty well with the HD 660 S with an open, spacious and neutral sound.

The Neumann NDH 30 is an ideal open-back alternative to the popular NDH 20. Of course, at ₹52,900, it is far costlier but what you get is an analytical, neutral sound profile that is perfect for mixing, mastering and editing. The headphones are also exquisitely built, feel quite robust, and look premium. However, there are cheaper open-back headphones out there such as the Sennheiser HD 660 S and the Beyerdynamic DT 900 Pro X. But if price is no bar for you, the Neumann NDH 30 definitely won’t disappoint any professional out there. These cans have spectacular sound, super premium build quality, and are an all-around great investment.