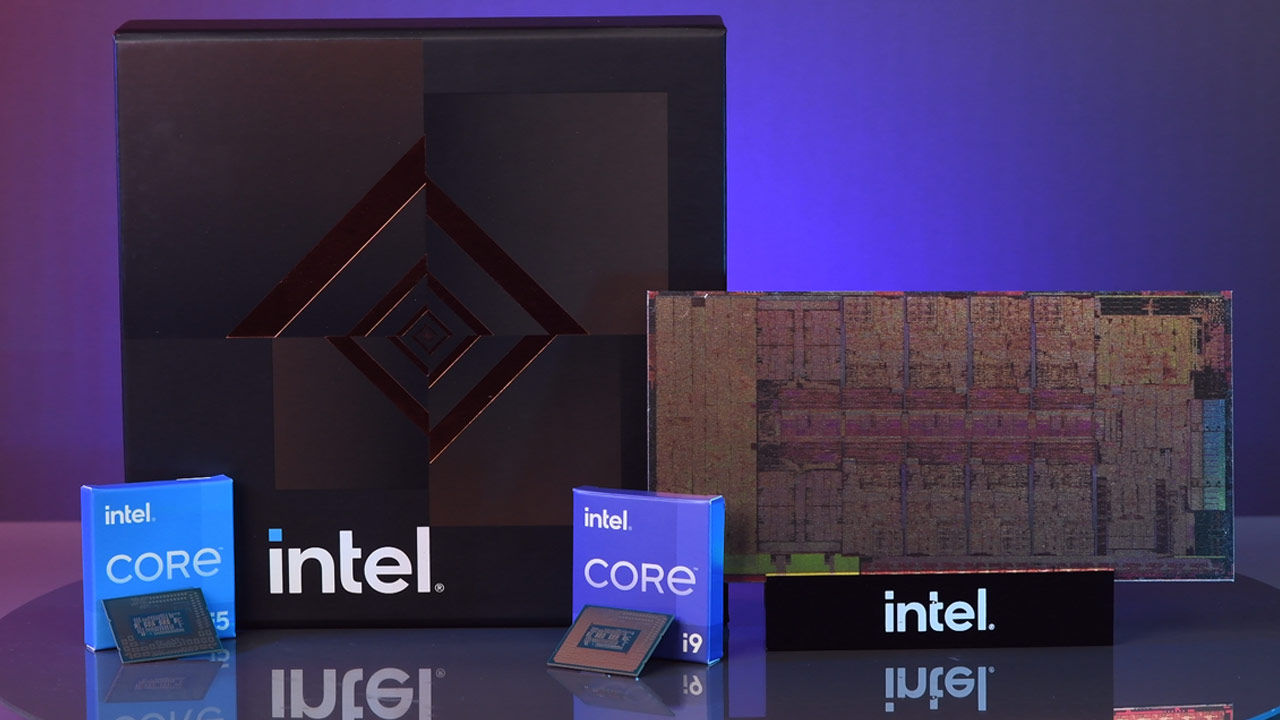 Intel is back with another desktop processor launch and this time, it’s the 12th Gen Intel Core “Alder Lake” family of desktop processors. These are based on their new hybrid microarchitecture which clubs traditional cores which are now called P-Cores (Performance Cores) with E-Cores (Efficiency Cores). This approach, which has been seen in Qualcomm SoC designs for ages, is now making its way onto the desktop. 12th Gen Intel Core Alder Lake CPUs are based on the Intel 7 process node (previously known as Intel 10nm Enhanced Super Fin process) and are touted to be more power efficient. We’ll see how that works out in the review but the SKU table which was revealed a couple of days ago during the Intel InnovatiON event shows the max Turbo Power to be around 241 watts with the base power being about 125 watts for the top-of-the-line Intel Core i9-12900K processor. It would seem that we’re in for an era where high wattage power supplies are soon going to be the norm.

The new Intel 12th Gen Alder Lake processors will see the latest DDR5 memory standard making its way into the mainstream PC space. Without any overclocking, Z690 motherboards will support DRAM modules rated up to 4800 MT/s which is quite the step up from DDR4 modules. Although, affordability considered, DDR5 would be anything but mainstream for the next year or more. Intel knows this for a fact, which is why you will find Intel Z690 chipset based motherboard variants that support either DDR4 or DDR5. When used with DDR4, the 12th Gen processors will go up to 3200 MT/s. In the past, when memory standards were introduced, we could often see “combo” motherboards which would have a pair of slots supporting the latest DDR standard and a pair of slots for the older memory standard. Unfortunately, for this transition from DDR4 to DDR5, we have not come across any such “combo” boards, yet. There are some crazy motherboard designs out there and we just might get what we’re looking for in the next couple of months.

The Z690 isn’t the end of the road. After the initial launch period, expect to see more affordable motherboard designs based on the Q670, H670, B660, H610, W680 and W685 chipsets. These were leaked a while ago with the release of an Intel Chipset driver version “10.1.18836.8283”. Also included in the leak was a mention of the X699 chipset. ‘X’ is usually used to denote the platform that’s used for Intel’s HEDT processors which haven’t seen the light of day for quite some time now. So we might just see powerful workstation processors from Intel in the coming months.

The Intel 12th Gen desktop processor lineup will only have six processors at launch. This includes two each under the Core i9, Core i7 and Core i5 segments. This leaves out budget PC builders for the second time in a row since even the 11th Gen Rocket Lake launch did not include any Core i3 processors. However, given how we already know that Intel has budget chipsets hidden away for a later launch, it’s quite obvious that they’ll have budget Core i3 processors under the Alder Lake family coming out soon. Meanwhile, here’s what the launch stack looks like.

Interesting thing to note here is that the base frequency for the P-Cores is a little lower than what we saw with the 11th Gen Rocket Lake desktop processors. While E-Cores didn’t exist in the previous microarchitecture, we did have T-Suffix 11th Gen Rocket Lake processors which had their base clock frequencies starting at 1.3 GHz. Not that it matters a lot, processors have various power levels and sleep states that allow for conservation of power and we could very well see the 12th Gen E-Cores consuming even less power than what the 11th Gen cores did.

Depending on which RAM type you decide to get for your PC, you will experience different performance levels. Needless to say, DDR5 trumps DDR4 since the stable frequencies are much higher leading to better performance. However, expect DDR5 to be 60% more expensive and the motherboards sporting DDR5 support will be a tad pricier compared to the DDR4 cousins.

Don’t be taken in by the presence of efficient E-Cores on Intel 12th Gen Alder Lake processors. The Core i9-12900K has a max turbo power of 241 watts and motherboard manufacturers tend to ignore such limits to boost performance. So expect the high-end processors to guzzle power like there’s no tomorrow. We tested both, the top of the line Core i9-12900K and the mid-range Core i5-12600K.

As always, we begin with Cinebench R20 to see how the processor fares in single threaded and multithreaded performance. Cinebench is often used by both Intel and AMD to showcase the impact of IPC improvements across generations. It renders a 3D scene and is based on Maxon’s Cinema4D, an animation, VFX and motion design software.

Even in the multithreaded run, the Intel Core i9-12900K goes straight to the top of the chart with a score of 10363 putting it ahead of the AMD Ryzen 9 5950X with a gap of 267 points. Intel’s 24 threads seem to do a better job than AMD’s 32 threads. It would be interesting to see how well it performs with DDR4 rather than DDR5. Vice-versa, we’d like to see what AMD can do with DDR5 as well.

Our Handbrake run basically consists of transcoding a 1080p video clip from one CODEC to another while upscaling the resolution. In particular, we use a 1080p H.264 video and upscale it to an MKV 2160p file while retaining the same frame rate. The upscaling and switching to H.265 makes the process quite arduous on the processors.

Handbrake benefits from both, high core count as well as high IPC. We track the average number of frames processed per second. We see the Intel Core i9-12900K take the lead yet again among Intel CPUs but overall, AMD still leads the pack.

Blender is a fairly well known open-source rendering software used by movie studios as well as by game developers. There are standard benchmarking scenes on Blender and we use multiple iterations of the Classroom scene for our tests.

AMD still retains its lead in Blender workloads but the 12900K has narrowed the performance gap compared to the 11900K.

7-Zip is an open-source archiving software with really good and frequently updated algorithms that perform compression and decompression. It’s the frequent updates that make 7-Zip a good benchmark. It also scales well with higher core-counts so there’s an added advantage with 7-Zip over other archiving software.

Mozilla Kraken is a browser-based JavaScript benchmark that executes several real-world scenarios that everyone comes across while normally browsing the Internet. It includes a host of different use cases such as searching, audio processing, image filtering, cryptography and JSON parsing.

In our gaming benchmarks, we run several new titles on the NVIDIA RTX 2080 Ti. There are a host of different games based on a variety of current gen game engines using different graphics APIs such as DirectX11, 12, Vulkan and OpenGL.

The scores here are for Shadow of the Tomb Raider, The Witcher 3, Assassin’s Creed Odyssey and Strange Brigade. We’ve also averaged the FPS scores across the games and included that in the graph. We can clearly see that Intel is still the best for gaming with the 12900K leading the pack. The AMD processors come next followed by Intel’s 9th Gen and 10th Gen processors.

While Intel did show great improvement in the iGPU performance with 11th Gen, it seems that the faster memory and faster DMI bus has improved gaming on the iGPU by a decent amount. The Intel Core i9-12900K is powered by Intel UHD 770 graphics which seems to just about equal the performance of the AMD Ryzen 3 3200G. It still has a long way to go before catching up with AMD’s GPUs especially since the latest Ryzen 7 5700G took things to a whole new level.

So how does the new hybrid microarchitecture fare in terms of power consumption? If you’re upgrading from 11th or 10th Gen Core processors, then the difference is minimal. It’s still a power hog that consumes north of 250 watts when under sustained load. However, you now have significantly more logical threads within the same power envelope and there’s also a decent performance gain overall. So the new microarchitecture is more power efficient.

Naturally, if the Alder Lake flagship processor is a guzzler, you’d want to know how hot it runs. We’ve gone and graphed the power consumption values over a 10 minute time period with the first 5 minutes showing heavy load and the latter 5 minutes had absolutely nothing running.

Intel certainly has a winner in their hands. The Intel 12th Gen Core “Alder Lake” Desktop processors outperform the Zen 3 based Ryzen 5000 processors in most of the benchmarks that we’ve tested the processors on. The hybrid architecture approach seems to work wonders and the ball is now in AMD’s court. For the enthusiasts, Alder Lake with DDR5 would be the go to combination for the sheer performance that it offers.