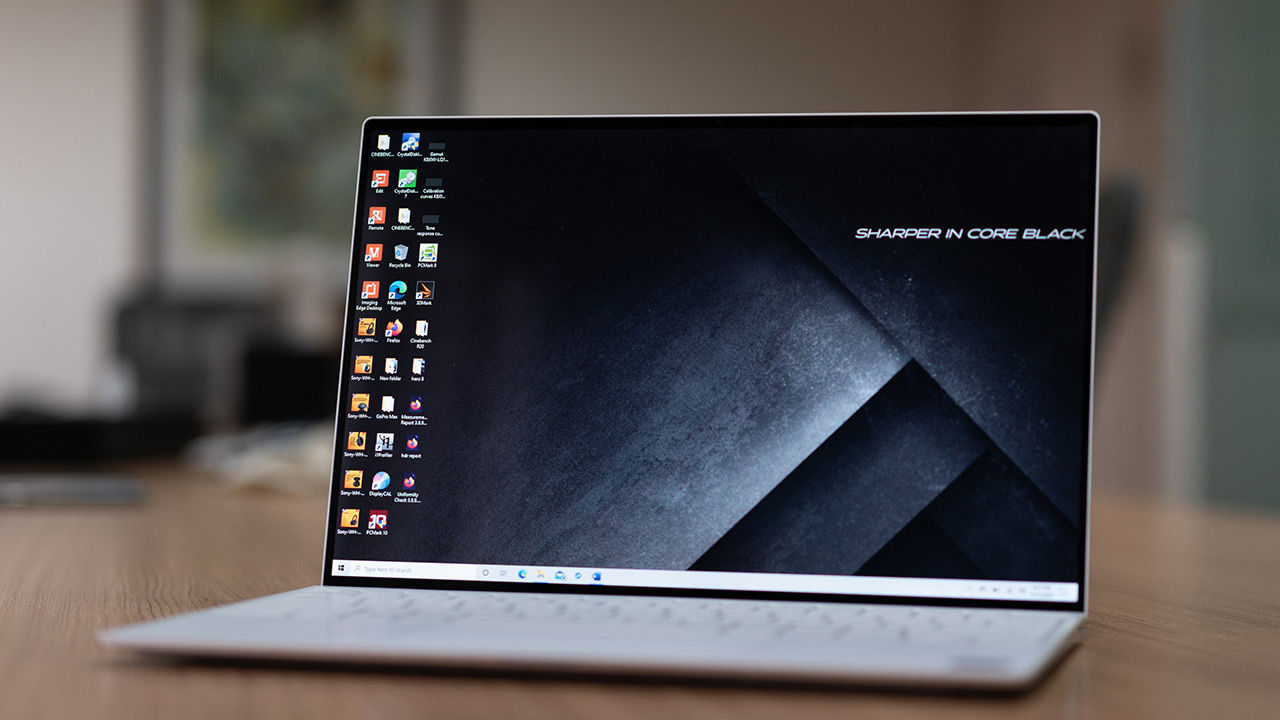 The Dell XPS 13, over the years, hasn’t seen much of a design change, with the last two versions being practically the same in terms of build and design. This year, however, Dell has really pushed the envelope of what thin and light can come to mean. The Dell XPS 13 9300 (Dell really needs a better model name scheme) is definitely a visual departure from the machines of the past. It’s got a noticeably different design and comes packing 10th generation Intel Core i7 processor, and a host of other hardware and software features that make the XPS 13 appear to be a rather lucrative device. But does it live up to the moniker? Does it justify the price tag? Here’s what we found out.

The Dell XPS 13 we have for review is supposedly the highest-end variant, packing an Intel Core I7-1065G7, 16GB DDR4 memory which is soldered onto the motherboard and a 1TB SK Hynix NVMe drive. Between these three components, the system is primed to perform at peak speed, as long as your expectations are in line with what this kind of hardware can do. Don’t expect to be able to do heavy-duty photo or video editing, but if you wanted to get some editing done on Adobe Lightroom (not Lightroom Classic), you do pull it off.

Our testing is divided into synthetic and real-world tests, which the Dell XPS 13 aces wonderfully. In terms of synthetic benchmarks, the XPS 13 comes ahead of the ZenBook 14 UX425 and the Lenovo Yoga C940, both of which comes powered by the same Intel Core i7-1065G7 processor in practically every synthetic benchmark. In real-world usage, the XPS 13 shines once again. Juggling between multiple doc files, an Excel file with 5 million data points and a 1.2GB PPT file. At the same time, Firefox was running with a very liberal 28 tabs running in the background. At no point does the system slow down. Firing up an instance of Adobe Lightroom does cause some slowdown overall, but quitting out of PowerPoint and Excel helps alleviate the issue, allowing me to edit my 24-megapixel RAW files shot on a Sony A7 III with relative ease. During all this time, regardless of whether the XPS 13 was running on battery or AC power, there was barely any warming of the keyboard. It has to be said that with general ambient temperatures now dropping, we expect system thermals to be better.

Overall, the Dell XPS 13 is a machine that’s built to take on your day-to-day for years to come, without giving you any reason for anxiety or complaints.

The Dell XPS 13 that we received for review comes equipped with a 4K panel. Dell has gone 16:10 for the display, which gives an effective resolution of 3840×2400. The display supports HDR10 and Dolby Vision content playback and as such, is capable of hitting peak brightness of up to 400nits. On paper, the display is spectacular.

Analysing the colour characteristics of the panel using an Xrite i1Display Pro, we conclude that the Dell XPS 13’s panel is well-calibrated right out of the box, however, a further calibration reduces the DeltaE levels significantly. The panel is able to reproduce 100 percent sRGB colour space and 89.8 percent of the DCI-P3 colour space accurately, making it great for proofing colour-sensitive work, and watching HDR content. The panel uniformity as per our tests was also good on this panel, showing little deviation.

The display on the Dell XPS 13 is 4K and glossy, two things that aren’t very desirable, to be honest. 4K resolution on a display this size is basically useless. At the resolution, with scaling set to 100 percent, good luck being able to read or find anything and scrolling across the screen using the trackpad takes almost a week. To get a good visual experience,  you’re going to have to either set the scaling to 250 percent or you’ll have to set the resolution to a more manageable 1920×1080. Enough bad news. The good news is that despite being a glossy display, the XPS 13’s panel manages to handle reflections rather well. Thanks to the peak brightness of 400 nits, outdoor day-time use of the laptop is a breeze. You won’t be hindered much by ambient reflections.

The biggest draw for this display happens to be the four-sided narrow bezels. Dell has managed to drop the thickness of the bottom bezel as well by re-engineering the timing controller for the display and placing it behind the panel. Dell’s engineering team really out-did themselves on this one, because not only are the bezels on the XPS 13 the narrowest ever on an XPS, but the webcam is also back to its normal position. In fact, besides the webcam, Dell has also managed to pack in IR-sensors into the top bezel, enabling facial recognition as part of Windows Hello.

Lastly, the display is touch-enabled and touch works well. There is no random skips or jitter when scrolling through long pages or large datasheets. While touch really isn’t my thing, if you like navigating Windows using the touch interface, this panel will let you do just that without any fuss.

One of the most important things about thin and light laptops is their battery life. The XPS 13 lasted 8 hours and 22 minutes in our PCMark10 battery life test, which is significantly lower than the obscene 12 hours or so that the Lenovo Yoga C940 did. However, the XPS 13 easily lasts almost 10 hours of day-to-day use for me, which includes things like writing reviews, stories, researching things online and light resizing of photos running WhatsApp web and of course, streaming music almost throughout the day over Bluetooth. There was also the occasional YouTube video or two thrown into the mix. Given all this usage, 9-10 hours is pretty solid.

Dell XPS 13’s battery life isn’t the only great thing about it when it comes to the battery. Dell’s Power Management app offers a staggering number of options that not only extend the hours your laptop can run on the battery but also settings that will extend the physical life of your battery. You can set the laptop to run off the battery and begin charging only once it reaches a specific percentage, despite being plugged in all day. The charge can also be stopped automatically once the battery reaches a percentage, that you can set on your own.

One of the most enjoyable things about the XPS 13 besides its display is the keyboard. While the Lenovo Yoga C940 has a great keyboard, the XPS 13 has it beat. The XPS 13 offers rather wide keycaps. All keycaps are generously sized, not just the letters. The keystrokes are short, but stiff, offering great feedback and a fast typing experience. The function keys also double up as essential controls for display brightness, volume and keyboard lighting (which is white, 2-stage lighting). Frankly, you’re going to get used to this keyboard and its layout really fast. It took me all of 3 days to become accustomed. The power button on the top right blends well with the keys in terms of shape and feel but also doubles up as a fingerprint sensor. This sensor works very fast and very well, unlocking the machine in less than a split second.

The trackpad on the XPS 13 is somewhat small, especially given that there are bigger ones on other machines like the MacBook Air. Despite the small-ish size, it’s definitely very usable. The smooth glass surface makes gliding your fingers over it a breeze and the trackpad translates that motion very effectively to the cursor.

The one area where the XPS leaves room for complaint is the I/O. All you get are two Thunderbolt 3.0 ports on either side, along with a microSD card slot and a 3.5 mm headphone/microphone jack. One Thunderbolt 3.0 port gets used up when you have the charging cable plugged in and the other one will get taken up by whatever accessory you plug into it. We had our SanDisk Extreme Pro SSD plugged in at all times, leaving no ports empty to plug-in the card reader for transferring photos and videos from our camera to the XPS. The lack of ports is definitely something you’ll feel, so getting a dongle is perhaps a good idea if your work is mostly mobile. IF you’re more of a desk-jockey, then a Thunderbolt 3.0 port would be a better investment.

The Dell XPS 13 this year looks distinctly different from its predecessors. The back of the laptop has an angular cut which accommodates the hinge. The overall thickness is lesser and frankly, when it’s open, the laptop almost feels like you may be able to snap it. However, good luck doing that. Dell uses woven glass fibre for the white coloured variant and a solid single block of aluminium. When open, the keyboard island has no flex, even if you try to force-bend it. When closed, this is rock solid. None of the halves exhibits any flex or play. The top has a smooth finish which feels really nice to the touch while the woven glass fibre on the keyboard island provides just enough friction to prevent your wrists from sliding around recklessly as you furiously type away at this machine. The Dell XPS 13 is a masterclass in how to build a premium laptop and there are no two ways about it.

The Dell XPS 13 is an incredibly slim laptop that packs quite an amount of power. With a 10th generation Intel Core i7 processor in tow along with 16B DDR4 memory, 1TB SSD and of course a gorgeous display capable of playing back HDR10 and Dolby Vision-enabled content. The battery life on this thing is excellent and the number of utilities Dell packs in allow you to really make the best of it. Dell finally updated the design of the laptop to make it appear different from previous models, without compromising on the rock-solid build quality. The fingerprint sensor works just as fast as the facial recognition hardware that’s packed into an impossibly thin top bezel. The Dell XPS 13 is definitely expensive, but you’re paying for a laptop that’s damn near perfect in form and function.