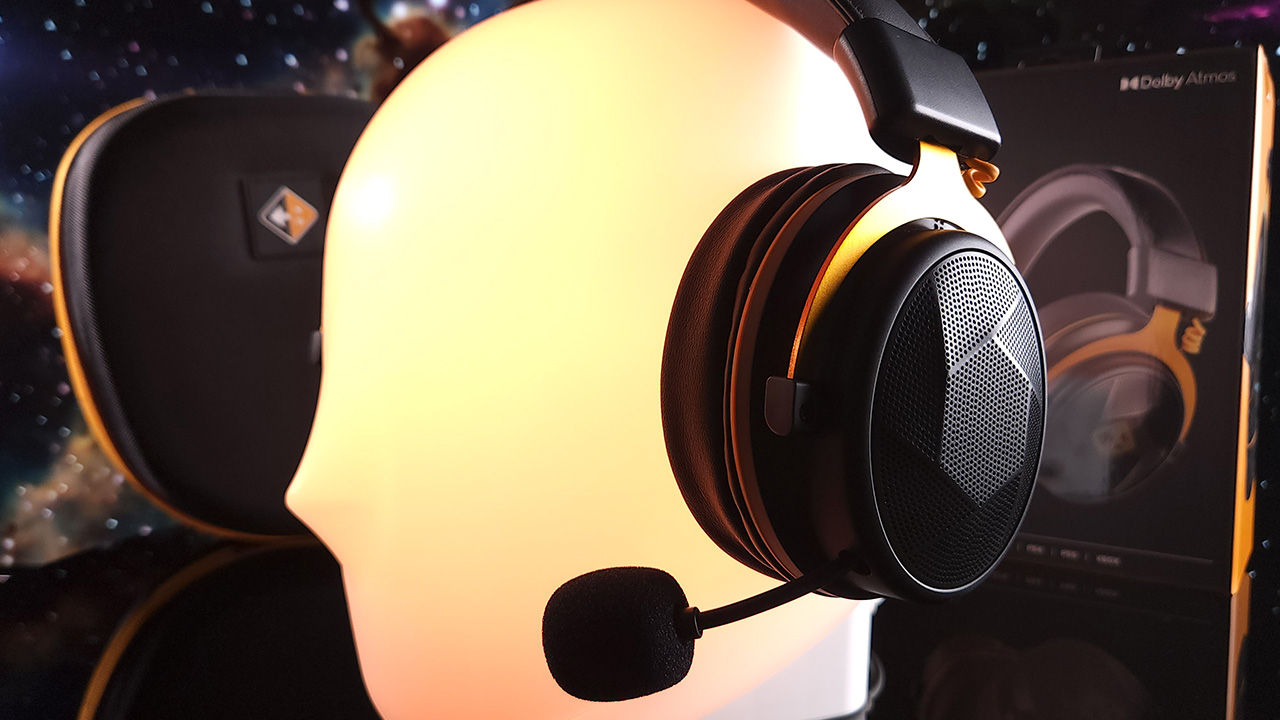 The Cosmic Byte Equinox Kronos looks and feels premium, is comfortable to use, and even comes with decent sound quality. At Rs 6,499 it’s a solid wireless gaming headset option, which also comes with Dolby Surround support.

If you have ever been in the market for budget gaming peripherals, then we’re sure the name Cosmic Byte has popped up several times. They’ve got a pretty decent lineup of budget gaming peripherals, including gaming mice, mechanical keyboards and gaming headsets. However, their latest lineup of gaming headsets looks to up the ante a bit, with premium build and design, and a lot more features; all while still being relatively pocket friendly. We’re talking about the new Cosmic Byte Equinox Kronos wireless gaming headset, which is a part of Cosmic Byte’s Equinox line of gaming headphones. Let’s dive into the review.

The first thing you’ll notice as soon as you unbox the Kronos is that it comes with its own carrying case. The black and yellow hard carrying case feels sturdy and well-built, and we weren’t expecting it, but it’s great that it was there. The headphones, and additional accessories are all packed inside the case; this also showcases that you can pack it all up nicely into the carrying case. Speaking of accessories, we’ve got a USB C charging cable, a Type-C wireless dongle, a USB A to C converter, a 3.5mm audio cable, a mic cushion, and the user manual.

With these accessories you’re certainly covered in the compatibility department, the Kronos should work just fine across all consoles, PCs and mobiles. Using it was as simple as plugging in the wireless dongle and turning the headphones on.

Like we mentioned in the intro, Cosmic Byte has opted for a more premium build and design with the Kronos and it shows. The pleather memory foam ear cups feel soft and sit comfortably on your ears. The headset has an aluminium frame inside a pleather headband, with memory foam for the part that sits on your head. As a result, the headphones are pretty comfortable to wear overall. We did find however that the ear cups are a bit on the smaller side. You might struggle to comfortably fit your entire ear into the cup if you’ve got large ears.

Coming to the on-ear controls, they’re all behind the left ear cup. We’ve got a volume dial that controls volume only on the headset, a mic mute button, and the power button which also doubles as the surround sound toggle. You’ve also got the 3.5mm port on the left earcup, while the typeC charging port is on the right ear cup.

The Kronos comes with a pull out microphone, which rolls up into the left side of the headphones. Like the earcups, the microphone is also a bit on the smaller side, and falls short if you’ve got a larger head which is a bit annoying.

The outside of each ear cup has a metal grill, inside which you have a yellow LED of the Cosmic Byte logo, which is in theme with the overall colour scheme of the headphones. Just the one colour though.

The Cosmic Byte Equinox Kronos actually has pretty good sound quality and we were pleasantly surprised. It comes with 50mm drivers and supports Microsoft Sonic and Dolby Surround as well. We don’t know if the surround works with PlayStation however since we didn’t get to test that.

It comes with its own software as well, including separate modes for gaming and music and customisable EQ. In addition to several preset EQs, you can customise the EQ yourself as well, which is great.

During our testing, like we mentioned, we found the sound quality to be pretty good. There’s good bass that doesn’t overpower too much, and there’s clarity in the mids and highs as well. The testing was all done on the default Cosmic Byte Optimised EQ preset.

Coming to sound stage and spatial audio, we found that while the sound stage itself is not too expansive (it isn’t too wide), the imaging is great. So positional awareness is no issue, you should have no trouble figuring out where sounds are coming from while gaming which is great, especially for competitive FPS games like Valorant or CSGO.

The microphone however didn’t perform too well. The Kronos comes with a pull-out unidirectional ENC (environmental noise cancellation) mic. Voice sounds distant and muffled. This might have to do with the microphone itself being too short like we mentioned above, but it certainly left us wanting. We’ve maintained that we’re fans of flip-to-mute, but being able to tuck the mic away into the headphones is not too bad either.

One of the things about the Kronos that really boggled our minds was the fact that they can’t be used while charging. Unless you plug in the aux as well. So if you want to use the headphones while they’re charging, you need to have two fairly short wires coming out of each earcup connecting to your PC or platform. You can see how this could be really frustrating. Other wireless gaming headphones we’ve tested in the recent past haven’t had this issue.

The Cosmic Byte Equinox Kronos has an advertised battery life of 24 hours. If you keep the volume at under 70 percent and turn the LEDs off. We found that we needed to charge the headphones once every 2-3 days which would be fine if it wasn’t unusable for the 2-2.5 hours it took to charge. We certainly weren’t going to have two short cables attached to the headphones while we were using them. So overall, decent battery life but still a hassle.

Cosmic Byte has certainly upped the ante with the Equinox Kronos. It looks and feels premium, is comfortable to use, and even comes with decent sound quality. At Rs 6,499 it’s a solid wireless gaming headset option, which also comes with Dolby Surround support. However, we found the mic performance left us wanting, and the fact that you’re unable to properly use the headphones while it’s charging is a hassle. Unless you’re okay with charging it before you head to bed or something.