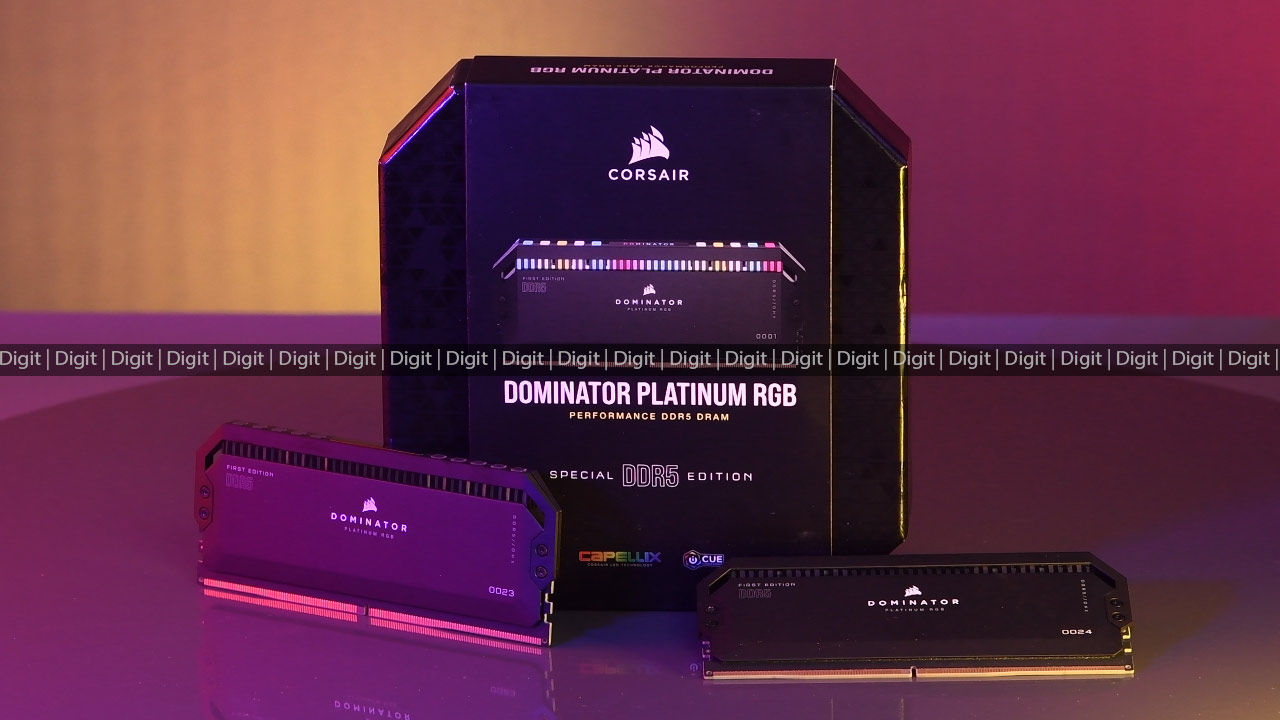 If you’re planning on building a new Intel rig based on the latest 12th Gen Core “Alder Lake” processors, then you’ll have to decide between getting a DDR4 motherboard or a DDR5 motherboard. Unlike previous instances where memory standards were introduced, there aren’t any DDR4 and DDR5 combo motherboards available. At least, not yet. So you’ll have to pick either and it goes without saying that DDR5 lends to more performance. The CORSAIR DOMINATOR PLATINUM RGB First Edition memory kit is literally the first DDR5 kit we’ve received and it upholds the build quality that Corsair is known for their premium memory modules while providing a decent overclocked XMP profile.

The reviewer’s package we received made quite the impression. We received a bit white box with just the CORSAIR logo on the top. Opening that revealed the DOMINATOR PLATINUM RGB retail package with the DIMMs inside. What stood out was the massive cutting board which had a white DOMINATOR PLATINUM RGB DIMM baked into hard resin. Why a “cutting board”? To signify “cutting-edge performance”. We’ll get to that soon.

The heatsink design is the same as other DOMINATOR Platinum RGB memory modules. The modules are 135 mm in length, 8 mm in width and 56 mm in height. While the width is not going to be a problem since most memory slots are wide enough to allow 8 mm thick modules to be placed side-by-side. On the other hand, the height is going to be a problem if you’re opting for certain CPU air coolers. In fact, for a top-of-the-line CPU such as the Intel Core i9-12900K, you’d most likely get either an AIO CPU water cooler or a beefy CPU air cooler. The AIOs will not be a problem but the latter, if designed to handle the TDP of the flagship CPU, will have issues with tall DIMMs. So that’s something for you to consider.

You’ve got a two-part metal heatsink held together by screws and thermal tape. Disassembly is quite easy and we get to see a single-sided DIMM inside. CORSAIR uses their low-power CAPELLIX LEDs for the RGB lighting so the impact on the memory power sub-system isn’t as much as with other brands. Aside from the LED diffuser that sits atop the DIMM, almost everything else is metal so heat dissipation isn’t that big of a problem.

A closer look reveals that the CORSAIR DOMINATOR PLATINUM RGB First Edition memory modules use Micron MT60B2G8HB-48B DDR5 SDRAM chips. The density for these chips is 16 Gb and they’re rated for 4800 MT/s which can be overclocked to 5200 MT/s when using the XMP profile. There are two channels per DIMM in the case of DDR5 memory standard, so you can see four chips on the left for the first channel and another four on the right for the second channel. When you pair two memory modules, then you’re  essentially running a Quad-Channel memory configuration.

Corsair is using an NXP LPC82x 32-bit ARM microcontroller to manage the memory modules, the RGB profiles and to control the PMIC. Speaking of which, the PMIC used is an APW8502C. There doesn’t exist a publicly accessible data sheet for this one so we can’t delve into any details. The only thing we know for certain is that the PMIC takes 5 volts input and breaks it down into 1.1 v for Vdd and Vddq, and 1.8 v for Vpp. Separating the PMIC from the processor lends the user greater control over the overclocking capabilities of the memory chips.

Lastly, the rear of the module has just the one FRC connector for the CAPELLIX LED strip. Overall, the CORSAIR DOMINATOR PLATINUM RGB First Edition memory modules are built to last you a long time.

We’d previously mentioned that with the DDR5 memory standard, each module can have two channels. So when you plug a pair of DDR5 modules onto your motherboard, you’ll see a quad-channel configuration in your OS.

We tested the units at the base profile without switching on XMP. At which point, we ran through one set of benchmarks. This was just to gauge the impact of DDR5 XMP profiles on the processor’s performance. While XMP 3.0 allows for a lot more profiles to be stored on the SPD, these modules only had one profile. But with DDR5, it’s way easier to OC, so scaling the module takes little effort. Without enabling XMP, the modules run at 4800 MT/s at 40-40-40-77 and with the XMP-5200 profile, this becomes 5200 MT/s at 36-38-38-74. The latency reduction might not seem like much but it’s something.

The pure synthetic performance bump obtained from switching to 5200 MT/s works out to be about 8.5 to 9.8 per cent which is quite significant.

However, when you switch to a real-world workload, the impact doesn’t seem as impressive as the performance improvement is usually between 1-3 per cent.

As for power consumption, we see a noticeable increase when running the kits at 5200 MT/s while running a heavy load. Power draw during copy operations can use close to 7.3 watts while during idle time, it goes down to about 3.2 watts.

This is the first DDR5 kit we’ve got our hands on, so there isn’t much comparative data to look at. Based on what we’ve seen so far, the build quality of the CORSAIR DOMINATOR PLATINUM RGB DDR5 modules is like no other. We’ll update the review once we get our hands on additional RAM kits to provide comparative data.