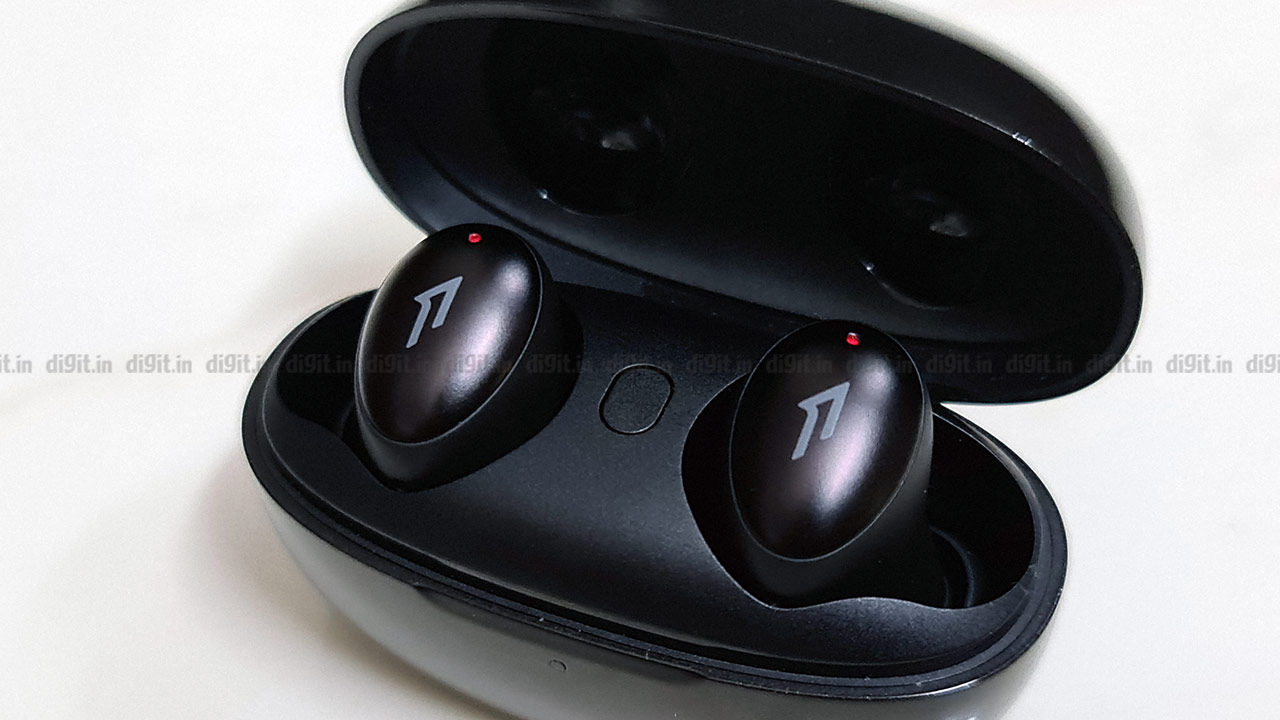 San Diego-based audio brand 1MORE, most popularly renowned for their critically acclaimed Piston Fit earphones, are back with their second product in the burgeoning true wireless market. Dubbed the 1MORE Colorbuds, the new-gen true wireless earbuds from the company is available in four different colours (Twilight Gold, Sakura Pink, Spearmint Green, and Midnight Black) and attempt to combine good audio quality with a dash of style. The black-coloured variant is the most discreet of them all and it is what we received for review. The other coloured variants look vibrant, while not looking too garish with the pastel tones. The earphones have some upgrades from the company’s previous pair of TWS earphones, the 1MORE Stylish True Wireless Earbuds. The design has been streamlined, touch controls have replaced the physical ones, and USB Type-C charging is now supported. Setting the striking shades of the Colorbuds and some improvements over its predecessor aside, let’s see if the Colorbuds manage to deliver a compelling audio performance with the tech packed inside these relatively tiny buds.

1MORE has streamlined the design of the Colorbuds with it having a smaller shape and size than its predecessor. The earbuds have improved ergonomics which has led to the removal of the ear fins that further streamlines the overall design. In our testing period, we found the Colorbuds to be lightweight, extremely ergonomic and reliable when it comes to the overall fit. Add to that the three additional pairs of silicone tips provided in the box, and you can find a fantastic fit for almost every user out there.

The earbuds, weighing merely 4.1g each, sport a smooth, matte texture with an angled nozzle for a better fit. The earphones are pretty much one of the most secure pair of buds we’ve tested. They stay put even during intense activities such as running or gymming without breaking a sweat. Speaking of sweat, the IPX5 rating on these earphones ensure that they can shrug off sweat during workouts and even endure light splashes.

The buds house the 1MORE logo on the rear housings. This area works as a touchpad for the buds via which users can control music playback and calls. The touch controls are rather limited, by default. A double-tap on either bud pauses/plays music while a triple-tap summons your device’s voice assistant. 1MORE has also added the auto-pause/resume feature which activates when you pull the buds out of your ear and put them back in respectively. This feature works extremely well, however, the same cannot be said for the touch controls, which sometimes fail to read the input, accidentally register touches or sometimes perform a different action than what was inputted.

Since pause/play can be controlled by removing and putting back the earphones, we opted to customise the double-tap control to skip tracks (on the right) and go to the previous track (on the left) which can be done via the 1MORE app. We also opted for volume controls with the triple-tap instead of the voice assistant control. So, while the default functions are limited, you can customise these as per your wishes via the app. Customisable controls are a nifty feature and we were ecstatic to be able to add in track seeking and volume controls to the buds. Nevertheless, we wish 1MORE allowed users to access single-tap controls as well. This would let users have another way to control pause/play rather than just the auto-pause/play feature, if you, like us, switched out the double-tap control for something else.

Now, finally moving over to the charging case of the earbuds, they do feel a bit flimsy, especially at the hinge of the case. Also, the case doesn’t feel quite as premium as some competitors such as the Lyptertek Tevi and the Jabra Elite 75t. The rounded design is nice to look at though if you like glossy finishes, and it can also stand upright. They’re also fairly pocketable but may bulge a bit from tight women’s jeans pockets. There’s a small battery indicator LED at the front of the case while the rear side houses a Type-C charging port.

Priced at Rs 7,999, the 1MORE Colorbuds offer a fair number of features, however, don’t expect features such as ANC and Ambient Sound at this price point even though some earphones such as the Oppo Enco W51 and the Realme Buds Air Pro offer these features at under 5K. 1MORE offers more refined sound and its resources are allocated towards ensuring good sound reproduction and excellent fit. Nevertheless, you do get features such as IPX5 sweat and water resistance, customizable touch controls, and auto-pause/play, as mentioned above, which is pretty decent.

Powered by Bluetooth v5.0, you get a pretty decent wireless range of 10m or 33 feet. In real life, the connection stays strong if we stray into a room next to the source device, but further than that, the connection starts breaking. Bluetooth 5.0 also ensures that there aren’t any unexpected lags and skips in the audio. The earbuds also support aptX and AAC for streaming to Android and iOS devices. The inclusion of the aptX codec means smooth streaming on Android devices and slightly better sound and wireless connectivity. Latency is also pretty low. On streaming services such as YouTube and Netflix, there was barely any noticeable delay between the audio and video.

Additionally, the buds also support mono mode, where one bud can be used independently of the other. However, the buds take a bit longer than usual to register mono mode and the music stops when you put one bud in the case. The other bud then reconnects and then you have to manually resume the music playback, which is slightly tiresome. Unfortunately, Bluetooth multipoint (the ability to connect to two devices at the same time) is missing on these buds.

Finally, coming to the app, there’s no customisable EQ available, which is a bummer. You can only customise controls, enable or disable Smart Playback (auto-pause/play) and update the firmware via the app.

From wired headphones such as the 1MORE Piston Fit, to true wireless ones such as the 1MORE Stylish, the company is respected considerably for its commendable audio performance made possible by powerful drivers, good codec support, and professional tuning by Grammy award-winning sound engineer, Luca Bignardi. The Colorbuds build on that legacy by offering compelling sound at the lucrative sub 10K price point. The buds aren’t overly energetic, which means they manage to preserve plenty of detail in the mids and highs.

The full range balanced armature with the Colorbuds definitely err on the side of the lows yet they aren’t muddy or distorted in any way. Amped up lows and bass response is evident in EDM, pop and Bollywood tracks, and there is a bit of auditory masking in the mids due to the exaggerated lows. Nevertheless, the mids by themselves aren’t suppressed, so they earbuds don’t have hollow-sounding vocals and lead instruments.

Tracks such as Scars by I Prevail have full-sounding vocals despite the slightly weighty drum beats. However, in the same track, when the full array of instruments come in at the same time, the vocals can lose some detail. So, these aren’t audiophile-grade earphones by any means, but they have enough substance and character to be enjoyable across a vast array of genres.

There’s also solid stereo separation which is apparent in tracks such as Hunter by Bjork. The passive isolation further enhances the bass rumble of the buds and background sounds are significantly diminished with the stellar fit.

Coming to call quality, the Colorbuds employ four microphones combined with cVc 8.0 ENC (Environmental Noise Cancellation) technology which offers pretty decent microphone performance. During calls, our voice sounded clear and distinct and background noises were mitigated significantly. Do keep in mind that due to COVID-19, we couldn’t test out calls in more noisy environments such as train stations.

Battery life, unfortunately, is one place where the new Colorbuds have gone backwards compared to its predecessor, the 1MORE Stylish. While the Stylish provided 6.5 hours of continuous playback on the earbuds from a single charge, the Colorbuds drops that figure by half an hour. The earbuds’ battery life is rated at 6 hours, while the total battery life with the charging case is a respectable 22 hours.

In our tests, we managed to get about 5 hours and 45 minutes of playback from a single charge with the volume set to 60 percent. The charging case managed to top off the buds two times fully, and got it to about 50 percent the third time before running out of juice. These figures are strictly decent in 2020, especially since we have competitors such as the Lypertek Tevi that feature a whopping 70 hours of total battery life! Nevertheless, 24 hours of total battery life is standard in 2020, and the Colorbuds come close to that desired figure.

The buds also come equipped with Fast Charging abilities, where placing them in the case for merely 15 minutes gives you two hours of playtime. To fully charge the buds, you will need to keep the buds in its case for about an hour and 10 minutes. If battery life is extremely important to you, you’d be better off with devices such as the Lypertek Tevi or the Sony WF-SP800N. The latter is significantly more expensive though, but you do get ANC as an added bonus.

If you are scouring the market for a reliable pair of true wireless earphones under 10K, the 1MORE Colorbuds are a pretty safe bet. Especially now, since the buds are discounted to Rs 5,999, which is a 2K cut from its original price of Rs 7,999. The buds sound great, the fit is extraordinary, they come with aptX support, and an IPX5 rating. However, if you are looking for something with a more balanced sound output and battery battery life, the Lypertek Tevi is an excellent choice for that. Honestly, it’s a toss up here and it comes down more to personal preference. If you like some more ‘oomph’ in the lows and bass response, go for the 1MORE Colorbuds, and if not, you’d probably want to take a look at other options.